Together, Ayesa and Moriones form the municipality of Ezprogui, which, while belonging to the Aibar valley, also borders on the mountains of Olaz and Andúa, lending the terrain a rugged appearance.

In the village, you can visit the parish church of San Andrés, a rural church (18th century) of notable size, made of stone. The modern main altarpiece includes a carving of Saint Michael the Archangel in late Baroque style at the top which was taken from the old main altarpiece, now lost.

The altar with the carving of Christ on the Cross in the chapel on the epistle side belongs to the same style and period (18th century). Among other objects, the sacristy houses a delicate, high-quality carving of Saint Marina (16th century, Renaissance style) from the chapel devoted to her in Ayesa.

Ayesa used to have chapels dedicated to Saint John, Saint Michael and Saint Agatha which have now disappeared. In border country and sitting on the pilgrims’ route, hospitable and monumental, Sangüesa lies on the boundary between mountains to the north and plains to the south, a town to see and experience. Interesting civil buildings, churches and convents evoke times of splendour and justify the well-deserved epithet of Monumental City. Sangüesa’s greatest gem is undoubtedly the Romanesque doorway of the Church of Santa María la Real from the end of the 12th century, one of the most important examples of the style. In Central Navarre, just 8 km from Sangüesa, stands the mediaeval fortress built on top of solid rock to which thousands of Navarrese make the popular Javierada pilgrimage at the beginning of March every year.

The castle’s crenelated towers frame the sky, adding to its mediaeval charm. The birthplace of Saint Francis Xavier, the castle and other buildings, partly reconstructed, make for a fascinating site. Located at the foot of the mountain range from which it takes its name, 50 kilometres from Pamplona and 16 kilometres from Sangüesa, the Monastery of Leire is home to magnificent treasures, such as its 11th-century crypt, its Gothic vault or the ‘Porta Speciosa’, a perfect Romanesque doorway from the 12th century. One of the most attractive and endearing monumental sites in Navarre, the tomb of Navarrese kings and the stage every summer for the presentation of the Prince of Viana award.

The rich natural heritage of the area offers you the possibility of visiting everything from natural and woodland reserves to wetlands. Here are some places you can visit 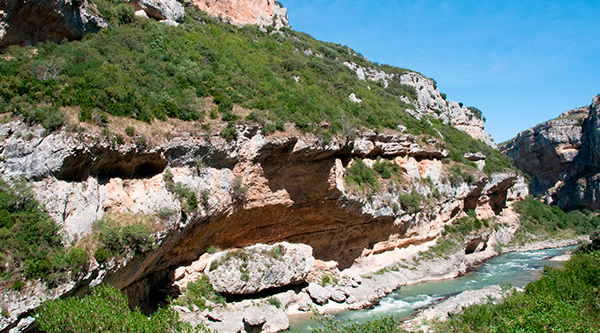 The Sierra de Izco and Sierra de Salajones form a mountain range which, although near to the capital of Navarre, is very little known to most. Thick forests in the shade, gentle slopes bathed in sunlight, ravines, abandoned villages, historical routes, beautifully built corrals, spectacular panoramic views…. Some of the main natural attractions of Navarre’s mountainous areas are their foces. This is the name given here to gorges or canyons, carved out by rivers and forming deep, narrow valleys with very steep walls. The Yesa reservoir, which stretches 10 km, is a place where you can do water sports, fish or simply rest in an area of great beauty.

Located in the municipality of Yesa and fed by the Aragón river, it is the largest navigable area in Navarre and a paradise for hikers and lovers of water sports. All this makes the reservoir an ideal space for trying your hand at sports such as dinghy sailing, windsurfing, water skiing and motorboating.

Although there are no signposted trails, walking along the banks and around the reservoir, using the water so as not to lose your bearings, is a great way to spend your time. Storks, goslings, starlings, grebes, bitterns, marsh harriers, bee-eaters, swallows; hundreds of birds move gently around the Pitillas wetland, forming a natural mosaic in which colour, movement and sound transport you to a world of calm. This natural space is a Nature Reserve, a Special Protection Area for birds and a Wetland of International Importance, which gives some idea of its great ecological significance. Three self-guided trails allow visitors to get a better idea of this 216-hectare nature reserve.

Here are some events held these days in the area: For a fortnight, the best dramatic works of all time, by playwrights such as Shakespeare, Moliere, Calderón de la Barca and Tirso de Molina, come back to life against the backdrop of the walls of the beautiful Royal Palace. The festival has two open-air stages, one of them in La Cava. Central Navarre is a delight to the senses. You can hear it, feel it and see it, and all thanks to events like this. Just before the Sanmiguelada, when thousands of sheep enter Bardenas Reales, Carcastillo gets the celebrations under way with the activities held on this festive day. Bike rides, contests, etc.

The wine (red or rosé). In confectionery, the most typical local products are the teacakes from Murillo el Fruto and Pitillas, the puff pastries from Tafalla, garrapiñadas (caramelised almonds) from Ujué, turrón royo (almond brittle) from Artajona and leche frita.

Wine cannot be ignored here, not only because of the many cooperative and private wineries but also because there is a Wine Museum in Olite. The area is also home to the Viticulture and Oenology Station of Navarre, which is devoted to the research, experimentation and dissemination of the most suitable techniques for growing vines and making wine. The Navarra Wine Route: http://www.rutadelvinodenavarra.com This company has received a grant for the productive transformation of self-employed people and micro-enterprises towards the green and digital economy (MRR) financed by the European Union – Next Generation EU with the collaboration of the SNE-NL and within the Recovery, Transformation and Resilience Plan of the Government of Spain year 2022.

Traditional house in the municipality of Ezprogui, located in the middle of the small, peaceful village of Ayesa.

Discover our tourist apartment in Sangüesa